Our next Trak Seeker 16T Adventure for 2015 will be to Lombok, Indonesia - who is interested in coming?

A PFD is not an ornament for your deck, or a cushion to pad out that hard fibreglass seat - it may be the only thing between you and disaster if it all goes pear-shaped.

Nearly all states and territories have a regulation that it is mandatory to wear a PFD when kayaking - there are some exceptions but we recommend that regardless of those you wear a PFD at all times. For state-by-state regulations refer to the links at the bottom of the page. We recommend a Type 2 PFD for comfort and visibility. See our page on PFDs for more information on the different PFD Types and the range of PFD’s we have available.


Your PFD should be a good fit to your body size and weight - the amount of buoyancy is determined by the size of the intended user and the relevant certification. There are PFDs made to fit children and even your dog (with grab handles for dog overboard!). Make sure you adjust the straps for a firm fit - a loosely fitted PFD will be a hindrance in the water.


Our hire fleet and programs use Ultra Trek PFDs - a good all-round PFD certified to Australian Standards. Our staff choose to use Kokatat MsFit Tour or Outfit Tour which are certified in the US to US Coast Guard standards.

Additional safety equipment we recommend you attach to your PFD to assist with communications, safety and navigation:


A whistle is your first line of communication with the pod, so it should be loud enough to hear over wind and waves. The Fox 40 whistle is the world’s loudest pea-less whistle, at 115db.


The choice of safety knife is also important. The main function of this knife is to cut yourself out of entanglements - tow ropes, leashes or fishing line hazards. The Safety knife-rope cutter is ideal for this. Having an edged or even worse, a pointy ended, blade is a recipe for disaster, trying to cut away and even re-sheathe it near your neck in choppy seas…
If you need a blade for cutting tomatoes for your lunch, spreading peanut butter or harvesting shellfish, keep a spare in your lunch pack or tool kit!
A personal locator beacon (PLB) is your last line of defence when you are in grave and imminent danger. It sends a signal to a satellite, ultimately leading to the emergency services being contacted. You must register your PLB with AMSA. The RescueME PLB1 is the smallest PLB available so fits easily in your PLB.

How much water you carry is a personal choice and may be determined by how far you intend to paddle. The Trek Ultra has a big pocket on the back that will hold a 3 litre water bladder. Kokatat have a smaller pocket with that attaches at the back (Tributary Hydration System) and is sold separately.

A handheld compass is a useful tool for navigation and in low-visibility situations. Even if you have a deck-mounted compass it is handy to have a base plate compass such as the Silva so assist with charting your course. 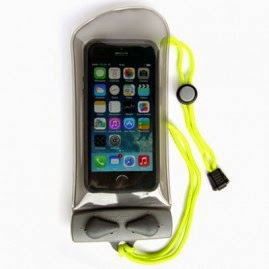 We recommend you take your mobile phone with you. Have your emergency numbers stored in it (emergency services 000, water police, coast guard) so that when in distress, it is easy to call for help and as a closed communication channel the whole world is not listening to your conversation! You may only ever need your phone to call home if you are running late, but you should protect it from salt water with a waterproof case such as the Aquapac, then you can take or make a call from anywhere.

Another good on-water form of verbal communication is provided by a VHF (very high frequency) Marine Radio, such as the ICOM 35. This is a 5W, floatable unit and fits inside purpose-built the pocket in both the Ultra Trek and Kokatat MsFit Tour PFD, allowing for one-handed operation. This is useful for pod management, receiving weather forecasts and communication with other water users. Be aware that this is an open channel of communication - other radio users can hear what you are saying! We recommend you undertake a marine radio operators course to get the most out of your radio.

You should also take along some snacks, sunscreen and lip balm and a watch to keep track of the time. Add a camera to record your adventure and by now you have quite a bit of gear in your pockets and attached to your PFD! Aside from the safety knife which threads through the shoulder strap, you should attach your other equipment to your PFD with a lanyard (cord) - these can be looped around the shoulder strap or in the case of Kokatat PFDs there are handy plastic attachments inside the front pockets.

For the full PFD fit out check out our YouTube:


We recommend you undertake instruction from a fully qualified Australian Canoeing instructor.

For more information on state regulations see the links below:

One stove does not meet all needs. The type of stove you choose may vary depending on the journey and the group. Always be aware of your group’s individual cooking and tea/coffee making needs and tailor fuel quantities accordingly. Become familiar with your stove’s fuel usage before you expedition.
We have been using these stoves for over 15 years for different purposes. All are available from our  online shop or click on the individual links for more info or to purchase.


Fuel Types & Ease of use
The big benefit of the Whisperlite is the versatility of its fuel capability – in areas where shellite (white spirit), methylated spirits or gas canisters are unavailable it can run on ULP auto fuel – you should be able to get some sort of fuel for this stove wherever you go. The fuel types used for this stove are also the most efficient – so where weight and volume are an issue, this gives the most days cooking for the fuels carried. It is possible to buy different sized MSR fuel bottles to suit the length of your typical trip.
The Trangia’s cooking system included 2 pots (comes in two different sized sets) and a frying pan/lid so it forms an integrated system. The methylated spirit burner is also probably the safest of the fuel types. Burning methylated spirits can result in rather sooty pots, but this can be reduced by adding a small amount of water to the fuel in the burner. With no moving parts, the Trangia is well suited to use in sandy environments. It is important to take care  transporting fuel in the Trangia burner (avoid doing this!) - if there is a leak into the pots which subsequently contaminates your food your meal will be inedible. We suggest you pour the fuel back into the bottle when finished and store the burner in a snaplock bag or small screw top cannister..
Gas stoves such as the Soto and MSR PocketRocket (and also the Trangia can use a gas system – sold as a separate item) are easy to light and some like the Soto have their own igniter. Gas is a very reliable fuel in cooler temperatures – more so than methylated spirits, so water can be boiled quite quickly – however they might not be so good for simmering food at low temperatures.  Fuel availability may be an issue – some remote areas do not stock cans of butane gas and they cannot be flown in. Another drawback of gas canisters is that it is difficult to tell how much fuel is left – you tend to have a lot of partly empty canisters left over. This can in part be overcome by knowing your stove and selecting a gas cannister in a size suitable for your trip.
Always carry more fuel than you think you might need and develop a good feel for how much you would use on a typical day.
Which to choose:
Gas (butane) stoves are good for small groups (up to 3 people) and are useful for interstate and international travel where weight is critical. It is important not to overweight these smaller stoves - do not use big pots on them - the Alpine 2 pot set is a good choice to complement these stoves. Be sure you can purchase gas canisters at your destination.They also tend to be quite noisy in their operation (how’s the serenity!).
The Whisperlite International is an excellent choice due to its capability of running multi-fuels. Be aware of fuel availability and local names for different fuels as well as regulations governing carriage of fuel bottles on airlines – make sure it is well aired – bottles have been confiscated! The high degree of fuel efficiency of the Whisperlite makes it our choice for longer expeditions and for group cooking for up to 10 people and they can handle a variety of pot sizes. The stove can be maintained in the field using the compact maintenance kit. This stove does not readily lend itself to variable temperature control but it is possible to simmer using an unofficial technique. Otherwise the pressure in the bottle should be maintained to maximise fuel efficiency.
The Trangia is a compact integrated system utilising methylated spirits – if travelling internationally ensure there is supply at your destination (and what the locals call this fuel) and ensure your fuel bottles conform to airline regulations. It is possible to use larger pots (or even a wok) but this does add considerable bulk. Of all these systems this is the most student-friendly, as it is fairly safe to ignite and extinguish (not pressured) and the fuel burns at a lower temperature than the other systems. Use in groups of 3-4 (Trangia 27-1) for a series of smaller meals. It is also the quietest cooking system, allowing you to enjoy the wilderness uninterrupted.